If your ‘fear of flying’ or ‘phobia of flying’ is holding you back from that dream holiday or important business trip, make the decision and take the step and phone me now and see how I can help you… 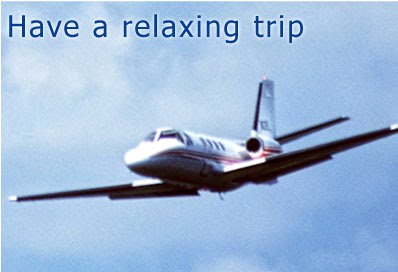 In this day and age, the fear of flying is very widespread. Perhaps as many as 1 in 5 people are suffering to some extent, from those who have never flown to those who used to fly confidently until they developed ‘somehow’ their ‘fear’.

The fear of flying is simply a learned response. At some point, you simply got very scared about flying. Maybe there was a lot of turbulence during a flight, maybe the plane spent ages flying in a holding pattern above an airport waiting for permission to land and you began to wonder how much fuel was left; perhaps you saw pictures of an airline crash on television, or in a newspaper. Many people don’t even remember how the flying phobia started.

Most commonly people simply imagine something disastrous is going to happen to the plane while taking off, flying or landing. Sometimes people have fear of confined spaces (claustrophobia) as well which just adds to the fear of flying. Often, and this is very common, it is just the fact that they are not ‘in control’ of the situation.

What virtually everyone with this fear has in common is that they imagine feeling scared ahead of time. Those with these fears who do fly (and there are many who fly despite being extremely anxious) will often use sedatives or alcohol in the hope of controlling their thoughts and feelings. This often will have little or no help with the anxieties experienced.

Many will have sleepless nights thinking way ahead of the impending flight, and days before can be out of control. Any or all of the symptoms of high anxiety may be experienced, such as sweating, tightness of chest, hyperventilation, dizziness, nausea etc. Fear of the fear is common, being scared because you are imagining being scared.

When people have more than one fear, such as falling, claustrophobia, losing control etc they are sometimes said to have what is called a ‘complex’ phobia, rather than a simple phobia such as dogs, needles, rats etc.

In my experience so far a so-called ‘complex’ phobia is just as treatable as a simple one.

What people describe as their ‘fear of flying’, or ‘phobia of flying’ will vary greatly, so the techniques I use to help you will match your particular situation. Essentially, I will use a combination of Hypnosis and NLP, the techniques I have found to be the fastest, easiest and most effective.

The fear of flying is treated with one to two sessions using the latest Hypnosis and NLP techniques.

For more about myself as a Hypnotherapist, click Kris von Sponneck .